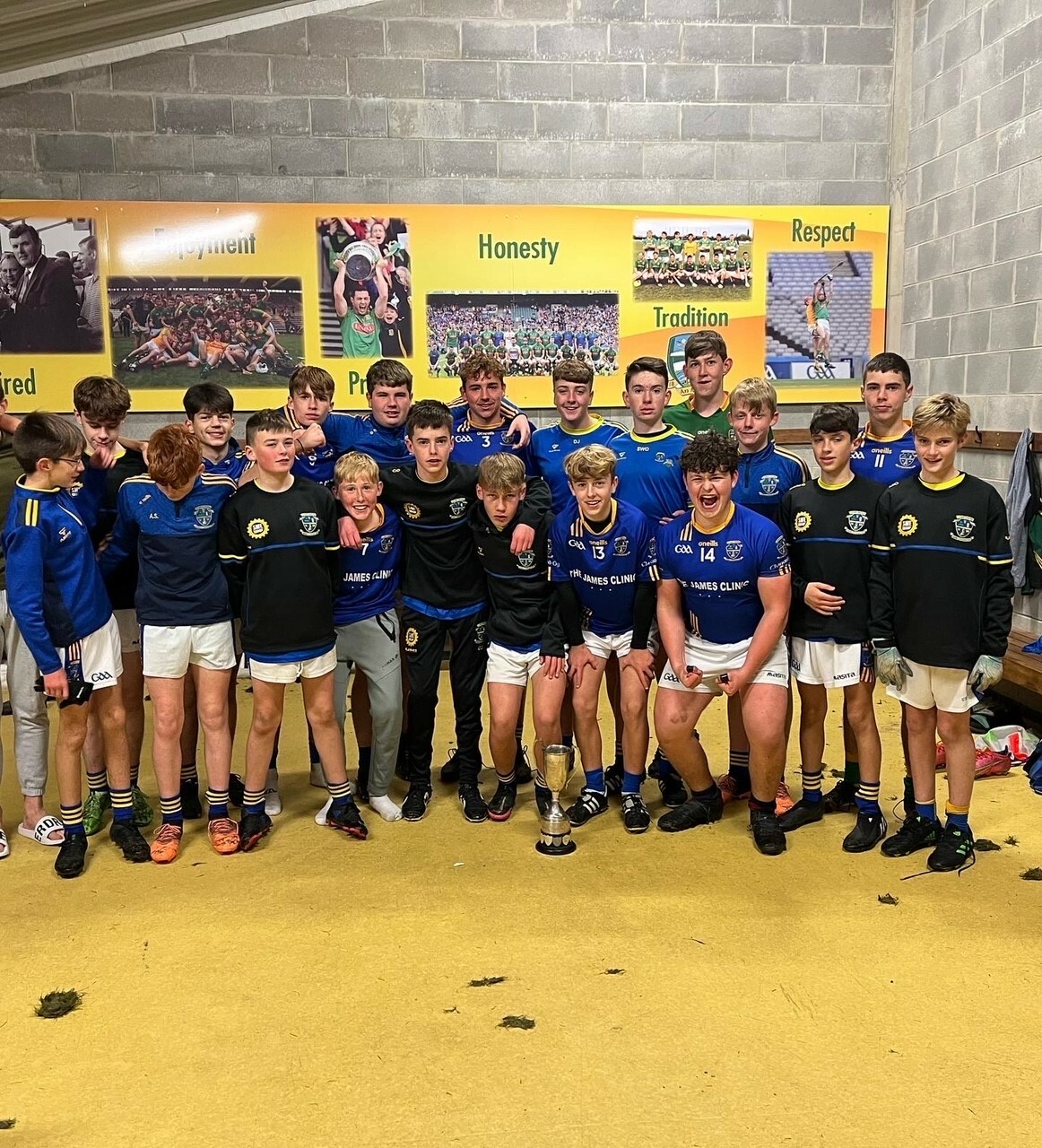 They say good things come to those who wait. Well, we waited, and waited, and waited some more, until sure enough The Holy Grail arrived on a cold October evening under lights in Dunganny. Our Under 15 boys emerged victorious on a very special night considering the disappointments some of these lads have experienced over the past 4 years. Multiple narrow defeats in finals and semi-finals from Under 12 to Under 14 turned out to be character building, and they needed every ounce of character to claim their first trophy last night. They emerged victorious after two epic games against a valiant St. Michael’s/Nobber side. Both games going to extra time taking almost 3 hours of football to separate the sides.

Clonard\Bracks made the quicker start and registered the opening score through Aaron Scott, making his usual lung bursting run from midfield. The North Meath side responded quickly from a free before Dean Carroll and Daniel Johns pointed from play and Kayden Plunkett registered another from a placed ball.

Then St. Michaels/Nobber sprung to life and hit a purple patch. Their very talented number 10 played a huge role in a well worked goal and kicked over several frees as fouls were conceded under pressure by the Clonard defence. To their great credit Dean Carroll and Kayden Plunkett did pull a couple back which left Clonard/Bracks down by four at the break, 0-6 to 1-7.

The South Meath side started the second half the brightest once again and were rewarded inside two minutes of the restart when newly introduced substitute, Darragh ‘Crow’ Kirrane, got on the end of low crossed shot from Dean Carroll to bury the ball to the back of the net. The perfect tonic after a stern half time team talk. Clonard/Bracks continued to apply pressure and were awarded fouls following superb running play all over the pitch, none more impressive than wing back Thomas Condon, who won every ball and carried superbly. Evan Joyce in the goals was having joy with his accurate kickouts as it laid a platform for his teams’ possession and pulled off a fine save to keep a narrow margin on the scoreline.

But St. Michaels/Nobber kept plugging away, in typical fashion, and hit two consecutive scores to retake the lead with one minute of normal time remaining. But just as typically, and in keeping with the drama of both games Clonard worked a further score through a Kayden Plunkett free to level matters with the last kick and bring it to extra time once again. His trusty left boot was never in doubt. Full time in normal time: Clonard/Bracks 1-10 St.Michael’s/Nobber 1-10.

This time it was the North Meath side who made the perfect start to the first period of extra-time as they mirrored Clonard/Bracks efforts of the opening minutes of the second half by hitting the net. A goal within two minutes saw them regain impetus following a 50-metre run and major from their number 10 once again, who was proving a real handful for the Clonard defenders, despite terrific defensive efforts from Alan Hannon and Shane Walsh-Oxley.

But as usual Clonard’s bravery and efforts paid dividends as they fought back. Callum Quinn pointed impressively following a perfect through ball from Kian Campbell. Then Deano added a free and there was just one between the sides. More dominance saw captain Niall McHugh break forward and while going for a point from the 20-metre line his effort sailed into the top corner of the net. A deserved piece of luck, or did he mean it, asked many. Half time in extra-time Clonard/Bracks 2-12 St.Michael’s/Nobber 2-10.

With ten more minutes to play of second half extra-time, no one was ruling out a second replay. But Clonard dug deeper again, and the left boot of Kayden Plunkett added another point from a free and the North Meath keeper then denied Darragh Kirrane a certain goal when he blocked a low powerful shot with his feet. Despite St.Michaels/Nobber very best efforts they couldn’t find a way to goal as Clonard/Bracks finished the stronger.

Then came the moment these lads have been waiting for as the final whistle blew with their team on the right side of the scoreboard in a final, 2-13 to 2-10. Cue elation from players, parents, and supporters as pride and joy was evident all around. County Minor chairman, Ray Finnegan, presented the cup to Niall McHugh. The young captain had the perfect birthday present as he turned 15 on the day, and eloquently paid thanks to the opposition, referee, grounds staff, and coaches.

There were superb performances all over the pitch tonight, example mentions go to Dean Carroll, Kian Campbell, Eoghan Monahan, and Niall McHugh, but man of the match goes to half back Thomas Condon who put in one of his very best displays in a blue and amber jersey. But everyone of them were heroes on an occasion they’ll never forget.

What a special night, one definitely worth waiting for.