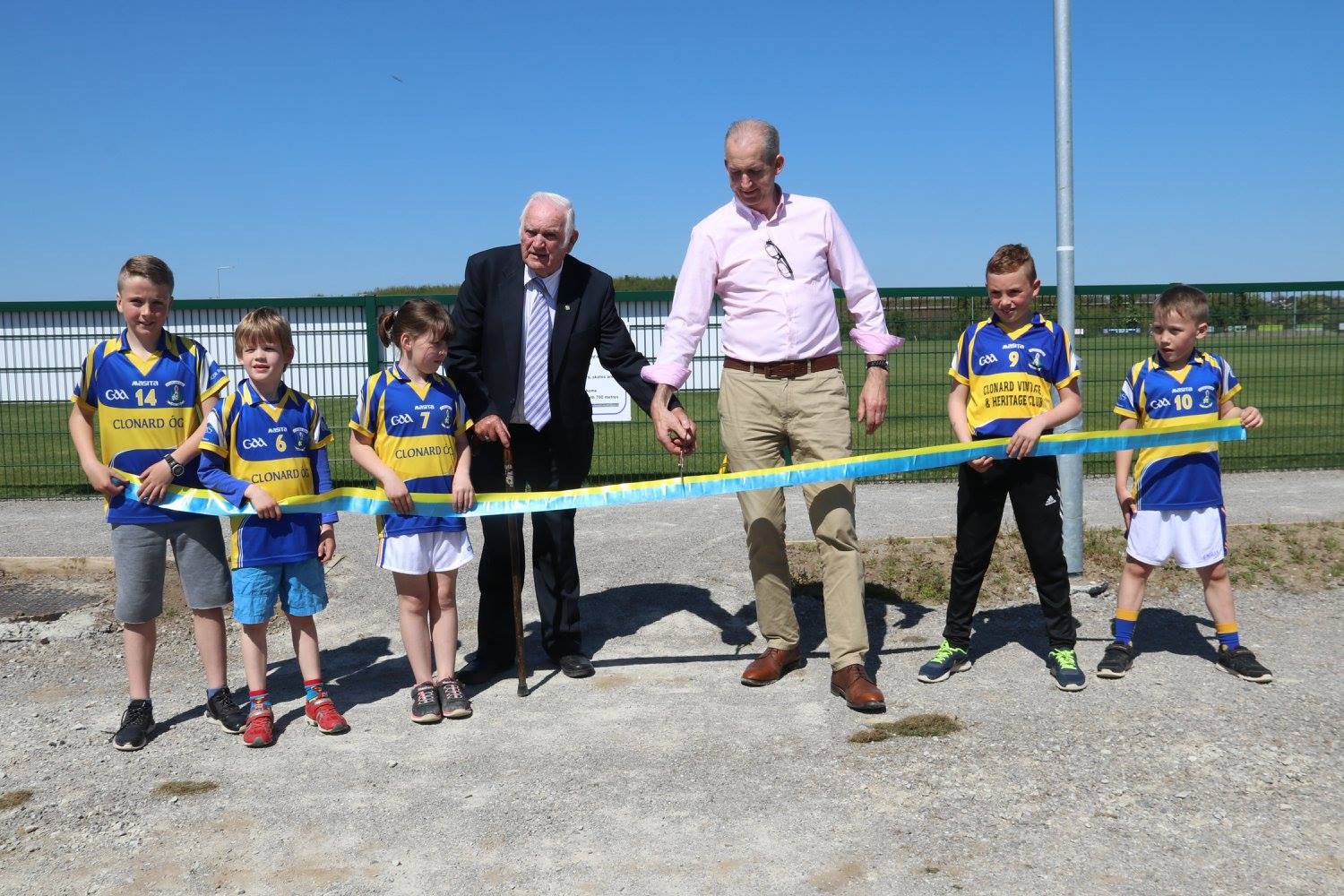 The 7th of May 2017 will go down as a momentous and truly historic day in the history books of Clonard GAA.

A very large crowd gathered on a beautifully sunny afternoon, which was so appropriate for the occasion. Shortly after 2 pm club Chairman Joe Gannon welcomed everyone, both young and old, and thanked the many people who made it happen.

Development Committee representative, David Campbell, expressed appreciation to his fellow development committee members, to main contractor CRL, project supervisor Richard Hayden, the volunteer workers on the project, Meath County Council and Councillors, and to the members and corporate sponsors who have financially contributed to the project via the Buy-a-Brick/Tree schemes and pitch-side signage.

David outlined details of phase two, a second pitch and mini astro pitch, which will commence in the coming months, assuming sports capital grant funding is awarded and will also be dependent on the success of this year fundraising events, organised by the newly formed fundraising committee. Phase three will complete the project with a clubhouse and dressing rooms. He also described how far the club has developed over the years to become a truly modern club in the community, paying tribute to Kevin Foley’s contribution as underage level in the past, culminating a championship trophy in 2011. He expressed the importance of the newly formed ‘Clonard Óg’ committee and nursery academy setup in 2014 which has contributed to the current strong underage structure in the club. The success of the club is also demonstrated by senior county representation by Adam Flanagan and minor stars from our sister hurling club Killyon, with Mikie Mullen and Brian O’Reilly representing the Meath minors with distinction.  As a modern club, it now also includes a Ladies football section and embraces technology with a the newly formed club website, www.clonardgaa.com, and the launch of the club’s new smartphone app, Clubify, which is a one stop shop for all fixtures, results, news, club lotto, and fundraising events. The app can downloaded from both the iphone App Store and the android Google Play Store.

Fr. Tom Gilroy and Rev. Hazel Scully then blessed the tree in roundabout in memory of deceased members of the club, and they would have all been looking down with pride, and maybe they were just responsible for the sunny and warm weather for the day that was in it. Fr. Tom and Rev. Hazel also blessed the walking track before Councillor Joe Fox and club chairman Joe Gannon cut the ribbon to officially open the walking track, with great applause from everyone.

Well done to all involved in both the facility development and the preparation of the grounds for the day, with a marquee hosting plenty of refreshments for all in attendance. Thanks to Killyon Community Council and Clonard Vintage & Heritage club for their organisation of the site.

Social membership is now open to all at just €20, and promises to attract the whole community to this fine facility.